Bitcoin saw a relatively sharp decline late-yesterday that marked a bearish resolution to its multi-day bout of sideways trading within the upper-$6,000 region.

This downwards movement has come about during a time of immense fear amongst cryptocurrency investors and has further compounded this uncertainty – leading the benchmark crypto’s fear and greed index to hit “extreme fear” levels.

In spite of this, analysts are noting that Bitcoin is on the cusp of closing its monthly candle below its 21-day ema, with history showing that a monthly close below this level could lead to a multi-month period of sideways trading.

Bitcoin falls towards $6,000 as bulls struggle to build support

At the time of writing, Bitcoin is trading down just under two percent at its current price of $6130, which marks a notable decline from daily highs of nearly $6,800, but a slight climb from lows of $6,000.

It does appear that bulls are in the process of establishing some support in the lower-$6,000 region, with buyers stopping this selloff from extending further just a few hours ago when bears stepped up and attempted to push BTC below $6,000.

This price action has come about in the time following Bitcoin’s break below its lower trading range boundary at $6,600 yesterday, with the ongoing selloff confirming that bulls do not currently have enough strength to break through the resistance around $7,000.

One interesting factor to keep in mind is that investors are growing extremely fearful at the moment, with this often being looked upon as a counter-indicator that has led one analyst to deem times of intense fear as a “buy zone” for Bitcoin. 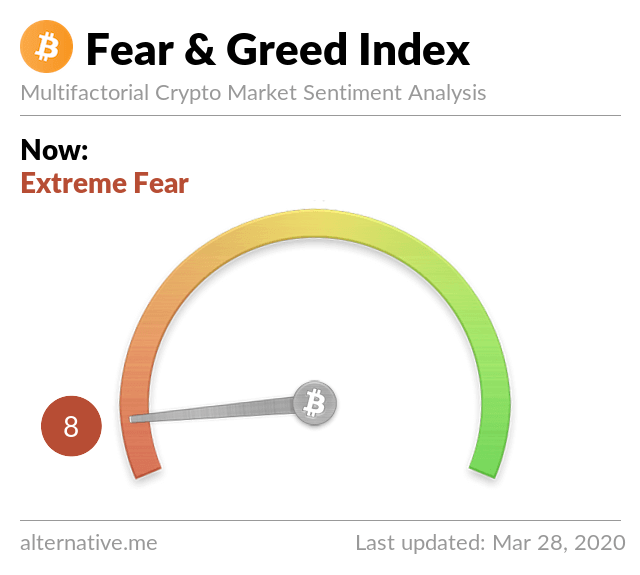 Teddy – a popular cryptocurrency analyst on Twitter – explained in a recent tweet that Bitcoin is currently trading below its 21-day exponential moving average (EMA), which is a key technical level that must be reclaimed if bulls want to have a chance at pushing it higher.

“BTC: Praying that we get a monthly close above the 21 day [exponential moving average]. Failure to do so, we will have a few more boring ranging months below it – similar to previous breakdown.”

Because there are only a few days left before Bitcoin closes its March candle, how the crypto trends going into this close will be imperative for determining which direction it will trend in April and in subsequent months.

Sun, 29 Mar 2020 15:04:22 GMT language
View Source
Investing in Cryptocurrency is high risk. CryptAssets does not offer financial advice. You should do your own research before choosing to purchase Bitcoin, Ethereum, or other Altcoins.